The Power of Belief 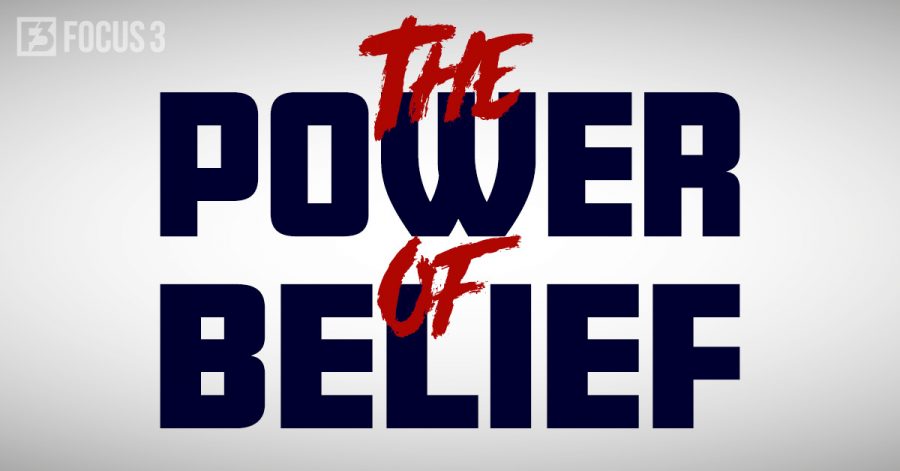 The Power of Belief

The Power of Belief often empowers the highest levels of performance. Performing with belief is a critical factor for achieving success at anything in life: sports, business, school, family, friends, neighbors and communities all are impacted by your beliefs.

What you believe drives what you do, and what you do determines what you achieve. When your belief is strong, you perform smarter, better, and with greater resilience. This is true everywhere: business, athletics, education, and personal relationships.

Win in Your Mind First

Under pressure you don’t rise to the occasion, you rise (or sink) to the level of your training. Challenging situations put pressure on your mental toughness. Talent isn’t enough. Physical training isn’t enough. You must be fully engaged mentally. In other words, you must believe. This is because the body follows the mind. The highest levels of performance require the deepest levels of belief. Elite performers win in their mind first.

A great example is the New England Patriots in the 2017 Super Bowl.

In the Third Quarter, the Atlanta Falcons were dominating the Patriots. The Falcons had a 28-3 lead, and it looked like an almost certain victory for Atlanta. No team in the history of the Super Bowl had ever come back from a deficit that big.  But then New England elevated their play. Their defense started getting stops and their offense started scoring points. As the Fourth Quarter began, you could see and feel New England’s belief getting stronger, and you could see and feel Atlanta’s belief starting to waver. With a minute left in the Fourth Quarter, the Patriots scored to tie the game and went on to win in overtime.

It was the biggest comeback in Super Bowl history.

Belief played a big part. The Patriots played poorly – and the Falcons played well – for 3½ quarters. But the Patriots never lost faith, and their belief kicked in when they needed it most. It empowered them to accomplish something that had never been done and which looked almost impossible at the time.

Why Belief Is So Powerful

Belief sees the invisible. It sees what has not yet been accomplished. Belief sees the goal, and it sees The Path required to achieve the goal. The Path is the work that must be done, and people who believe have a crystal clear vision of what that work looks like. They see themselves training, practicing, performing, and achieving. They see themselves on The Path and doing the work.

Belief Creates Strength of Will

Strength of will is not about the commitment to start; it’s about the commitment to continue. It’s about the many “re-commitments” that are necessary to sustain the journey when it gets difficult, tedious, and painful.
Belief is saying “I will” when it gets hard. It is the mindset that says, “I will do the work. I will grind. No matter how difficult, no matter how big the challenge, I will do whatever it takes for as long as it takes.”

Resilience is the ability to respond and bounce back from adversity. It is the capacity to navigate through challenges, difficulties, and setbacks. Belief doesn’t just survive adversity, it gets stronger because of it.
Belief empowers people by giving them unshakable resolve. Belief is what animates the ability to respond to any situation with extraordinary toughness, tenacity, and determination.

When difficult situations hit, belief does something very powerful: It sustains your vision and strengthens your will. It makes you stronger because of the adversity that you are forced to endure.

Here is what Randy Pausch, the author of The Last Lecture, wrote about adversity:

Belief does one more thing that is unique in human performance. Belief unleashes you. Because it has laser focus, and because it burns through doubt and distractions, belief is the ignition that activates your ability to operate at max capacity. It gives you full access to your talent and ability. Belief is the trigger that empowers you to perform at the highest level.

Under competitive pressure, your belief determines how much access you have to your capabilities. Most people work very hard to develop capabilities, but sometimes fail to gain full access to those capabilities because doubt, distractions, and negative thinking hold them back. Again, under pressure you don’t rise to the occasion; you rise (or sink) to the level of your training.
Belief ignites and activates everything. Talent isn’t enough. Training isn’t enough. You must be fully engaged mentally. The highest levels of performance require the deepest levels of belief. It bears repeating: the elite win in their mind first.

Finally, consider this: Belief is not simply about individual performance. It is also an essential element of team performance. On a team, belief is a force multiplier. One of the most powerful forces on earth is a team bonded together by a shared belief in each other and their mission. An elite team has an elite level of belief.